Note that applications using Intel® MKL 2019’s JIT functionality will run on all architectures; in case JIT is not supported for the current architecture or problem size, Intel® MKL will transparently fall back on standard GEMM routines.

Intel MKL v.2019 provides two interfaces for users to access JIT functionality. The first is completely transparent to the user and is activated through an extension of the existing MKL_DIRECT_CALL interface (see the MKL_DIRECT_CALL documentation for more details). The second interface involves new dedicated Application Programming Interfaces (APIs) for advanced users willing to change their code, and provides the ability to extract even more performance by removing most of the associated call overhead.

The following sections describe how to use these features in more detail in C/C++. The new JIT functionality may also be accessed from Fortran 90, using a very similar interface. See the Fortran documentation or the examples bundled with Intel® MKL for more information on using JIT GEMM in Fortran 90.

The simplest way to take advantage of Intel® MKL 2019’s new JIT GEMM capabilities is to define the preprocessor macro MKL_DIRECT_CALL_JIT. No other changes are required. (If you are using MKL in sequential mode, define MKL_DIRECT_CALL_SEQ_JIT instead.)

When MKL_DIRECT_CALL_JIT is active and the user calls GEMM, MKL will decide whether JIT code generation could be beneficial for the GEMM problem given. If so, it will generate size and architecture-specific kernels, tailored to the given parameters (layout, transa, transb, m, n, k, alpha, lda, ldb, beta, ldc). These kernels are then cached and reused every time GEMM is called with the same set of parameters. If MKL decides JIT is not beneficial, the standard GEMM routine will be called as usual.

The MKL_DIRECT_CALL_JIT and MKL_DIRECT_CALL_SEQ_JIT preprocessor macros allow you to quickly evaluate whether the JIT feature provides performance benefits to your applications, particularly those that call GEMM many times for small problem sizes.

Let’s assume that this code is extracted from a file named bench.c which is compiled using the following command line (Linux):

When running the generated executable bench on an Intel® AVX2 or Intel® AVX-512 system, the first iteration of the loop will generate a dedicated size and architecture-specific GEMM kernel and store it. Subsequent loop iterations retrieve the stored kernel and reuse it.

The chart below illustrates the performance benefits of the MKL_DIRECT_CALL_JIT feature on an Intel® Xeon® Platinum 8180 processor for some small square matrix multiplications. The performance shown in this chart does not include the kernel generation time; we are assuming here that the kernel generation cost is amortized by a large number of SGEMM calls using the same input parameters, but different matrices. The performance of conventional SGEMM and SGEMM with MKL_DIRECT_CALL are provided for comparison. Data on other precisions can be found in the next section of this article. 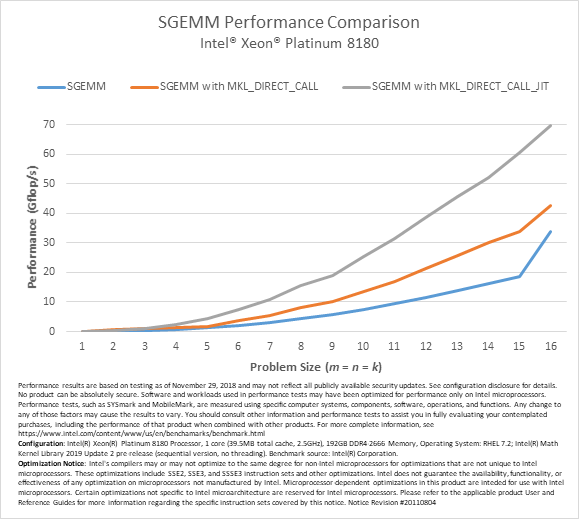 To conclude, MKL_DIRECT_CALL_JIT allows the user to speed up small matrix multiplies with no code modifications. However, caching kernels and looking them up at runtime does incur some overhead. For best performance, the user should turn to Intel® MKL’s dedicated JIT API, described in the next section.

The GEMM JIT kernel and the required runtime code generator are generated and stored by calling mkl_jit_create_{s,d,c,z}gemm, which takes as inputs the standard GEMM input parameters (except the pointers to matrices A, B, and C) and a pointer where a handle to the code generator (an opaque pointer) will be stored. The mkl_jit_create_{s,d,c,z}gemm function returns a status code of type mkl_jit_status_t, whose value may be one of the following:

There are several reasons MKL_NO_JIT may be returned:

After creating the code generator, call mkl_jit_get_{s,d,c,z}gemm_ptr to retrieve a function pointer to the generated GEMM kernel. This function pointer performs the requested GEMM operation, taking four parameters: a handle to the code generator, and pointers to the A, B, and C matrices. Note that a valid pointer is returned even when mkl_jit_create_{s,d,c,z}gemm returns MKL_NO_JIT; in this case, standard GEMM will be used, rather than a JIT generated kernel.

Finally, when the kernel is no longer needed, the mkl_jit_destroy function frees memory associated to the code generator and GEMM kernel.

The code sample below illustrates how the loop in the previous example can be rewritten to use calls to the mkl_jit_create_dgemm, mkl_jit_get_dgemm_ptr, and mkl_jit_destroy functions.

// declare a handle on the code generator
void* jitter; 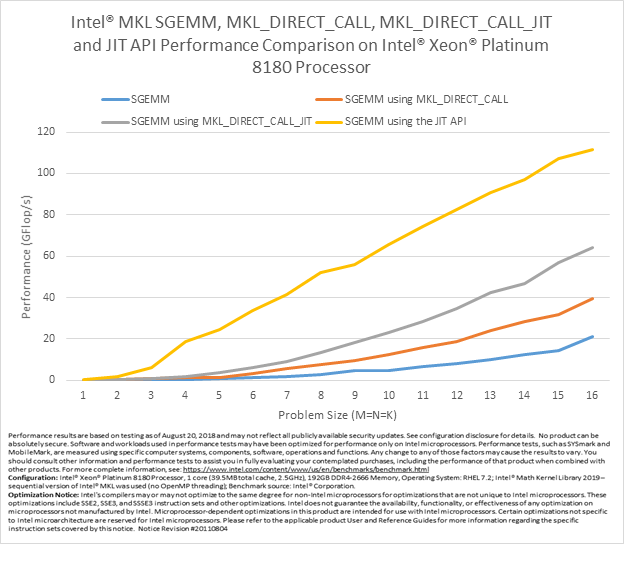 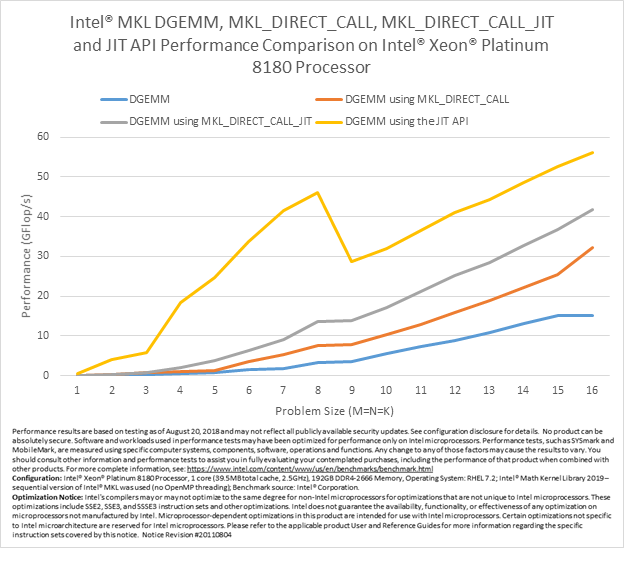 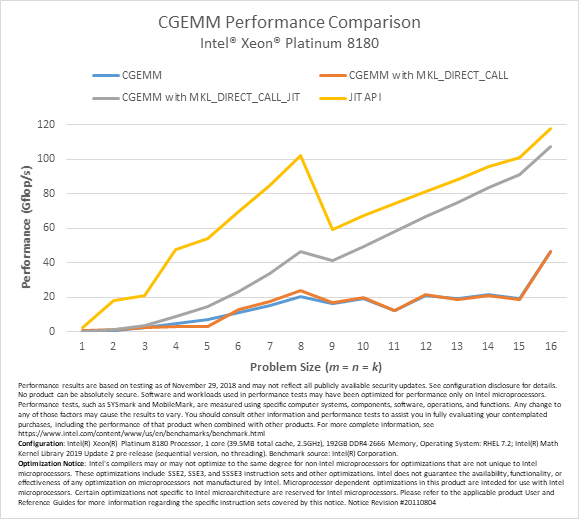 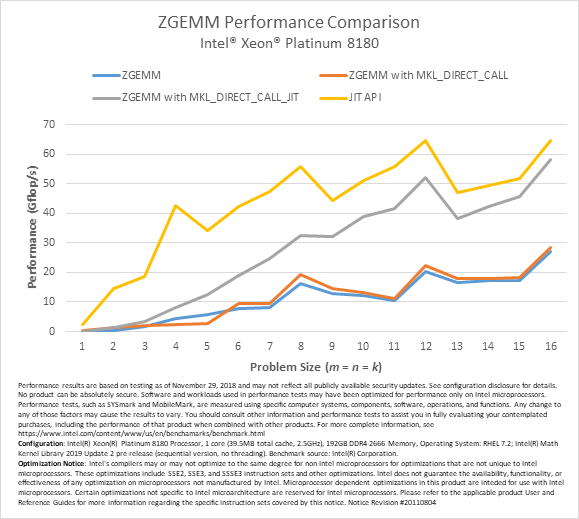 Deciding When To Use JIT

Here are some guidelines on when to use JIT, and which API to use:

Currently, all JIT GEMM kernels are single-threaded. However, it is safe to create, call, and destroy kernels from multi-threaded code. If you have a GEMM problem where one of m, n, and k is very large, and other two are small, it may be worthwhile to divide the problem between multiple threads and use JIT on the subproblems.

Because generating JIT kernels requires some time, it is typically advisable to use JIT only when you can reuse the generated kernels many times; as a rule of thumb, hundreds of times or more. (Recall that the performance charts in this article assume that the cost of JIT kernel generation is amortized across a large number of calls to the same GEMM kernel.)

The tables below provide estimates for the number of function calls required to justify the up-front kernel generation costs of JIT for some small problems, rather than using conventional Intel® MKL GEMM. For each problem, a range is given. The upper number in the range is representative of a program generating only one GEMM kernel. The lower number is representative of a program generating multiple GEMM kernels. In the tests, all leading dimensions were aligned to multiples of 64 bytes.

The data above should be taken as rough guidance only. The exact number of calls required to amortize kernel generation cost for your application will depend on many factors: the processor used, input parameters, kernel, and cache usage (data and instruction), among others.

The new JIT capabilities in Intel® MKL 2019 significantly accelerate small matrix multiplies by generating GEMM kernels tailored to the inputs you provide. Two interfaces allow you to leverage JIT in your own applications. The MKL_DIRECT_CALL_JIT extension transparently enables JIT when it may be beneficial, allowing you to quickly gauge whether JIT can accelerate your application. Or, for best performance, a new dedicated JIT API gives you direct access to generated kernels. Refer to the Intel MKL Developer Reference for further details.